Is large diameter pipe that is assembled and inserted into a recently drilled d form designed to provide a tight hydraulic seal. The thread form is similar to that of Acme threads, EUE, IF, Full Hole and others, the force is transmitted almost parallel to the axis and thread is about the same strength as standard v threads. 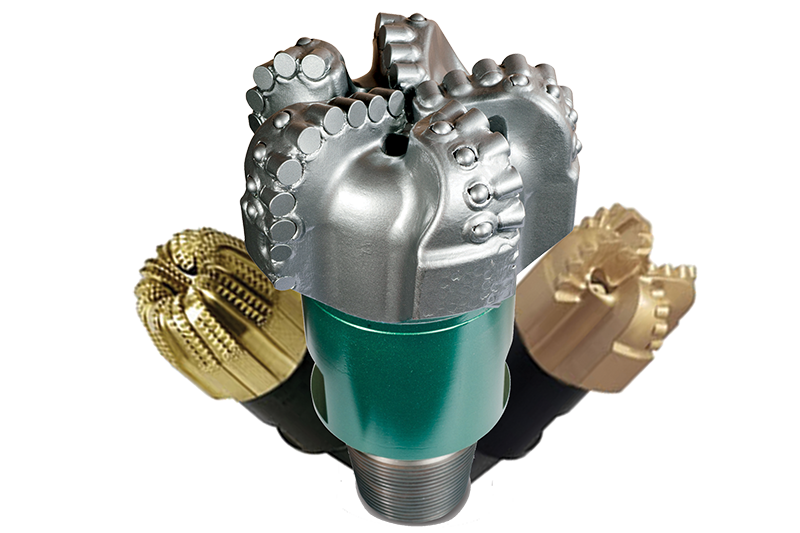 Drill bits are cutting tools used to create cylindrical holes, almost always of circular cross-section. Drill bits come in many sizes and have many uses. Bits are usually connected to a mechanism, often simply referred to as a drill, which rotates them and provides torque and axial force to create the hole.

Traveling block is the freely moving section of a block and tackle that contains a set of pulleys or sheaves through which the drill line (wire rope) is threaded or reeved and is opposite (and under) the crown block (the stationary section). The combination of the traveling block, crown block and wire rope drill line gives the ability to lift weights in the hundreds of thousands of pounds. On larger drilling rigs, when rising and lowering the derrick, line tensions over a million pounds are not unusual.

Blowout preventer (BOP) is a large, specialized valve or similar mechanical device, used to seal, control and monitor oil and gas wells to prevent blowout, the uncontrolled release of crude oil and/or natural gas from well. They are usually installed redundantly in stacks. Blowout preventers were developed to cope with extreme erratic pressures and uncontrolled flow (formation kick) emanating from a well reservoir during drilling. Kicks can lead to a potentially catastrophic event known as a blowout. In addition to controlling the downhole (occurring in the drilled hole) pressure and the flow of oil and gas, blowout preventers are intended to prevent tubing (e.g. drill pipe and well casing), tools and drilling fluid from being blown out of the wellbore (also known as bore hole, the hole leading to the reservoir) when a blowout threatens. Blowout preventers are critical to the safety of crew, rig (the equipment system used to drill a wellbore) and environment, and to the monitoring and maintenance of well integrity; thus blowout preventers are intended to provide fail-safety to the systems that include them.

Shale shakers are components of drilling equipment used in many industries, such as coal cleaning, mining, oil and gas drilling. They are the first phase of a solid control system on a drilling rig, and are used to remove large solids (cuttings) from the drilling fluids ("Mud"). Drilling fluids are integral to the drilling process and, among other functions, serve to lubricate and cool the drill bit as well as convey the drilled cuttings away from the bore hole. These fluids are a mixture of various chemicals in water or oil based solution and can be very expensive to make. For both environmental reasons and to reduce the cost of drilling operations, drilling fluid losses are minimized by stripping them away from the drilled cuttings before the cuttings are disposed of. This is done using a multitude of specialized machines and tanks.

A drilling rig is a machine that creates holes in the earth sub-surface. Drilling rigs can be massive structures housing equipment used to drill water wells, oil wells, or natural gas extraction wells, or they can be small enough to be moved manually by one person and are called augers. Drilling rigs can sample sub-surface mineral deposits, test rock, soil and groundwater physical properties, and also can be used to install sub-surface fabrications, such as underground utilities, instrumentation, tunnels or wells. Drilling rigs can be mobile equipment mounted on trucks, tracks or trailers, or more permanent land or marine-based structures (such as oil platforms, commonly called 'offshore oil rigs' even if they don't contain a drilling rig). The term "rig" therefore generally refers to the complex of equipment that is used to penetrate the surface of the Earth's crust.

Tubing Collars and Slips, is a tool used primarily in the oil industry for gripping the drill string while assembling or reassembling parts of the string. The spider is normally operated hydraulically from a remote location. The spider consists of multiple gripper tools, sometimes constructed as wedge-shaped arms (Slips (Oil Drilling)) that holds the string by the downward force of the pipe. Teeth on the inside of the slips grip the pipe and the resulting compressive force inward on the drill pipe holds the pipe securely.

Elevators, as developed for the drilling industry, are a hinged device with handles that are used to wrap around the tool joint of drill pipe, casing or lift nipples (for collars) to facilitate the lifting or lowering of them singly or of the drill string as a whole.